Nowadays, it is typical for e-commerce platforms to use several different APIs to deliver wide-ranging functionality to their visitors. Application Programming Interfaces (APIs for short) are typically how different applications can be utilized on these platforms. These Application Programming Interfaces use the popular REST web service over the HTTP to expose resources that enable the users to interact with the application securely. REST-APIs use HTTP to communicate using different functionalities that are read, write, put, delete, and patch. The operations are done on the application database and REST-APIs assure a responsive exchange between different applications

There are several important considerations before designing or choosing the right API for your platform- such as the expected concurrency, access/ authorizations, ease of use, performance and other factors. The API’s performance is, among other things, closely related to the concept of caching, which we shall explore in this blog.

First, let us understand what is meant by an application performance. App response time is a critical factor for designing and developing well-functioning and efficient applications. API caching helps to improve the response time between the user browser and the server. Basically, an API just like any other program interacts with a database/ server when a request is made to it by the user. The caching helps to eliminate the need for the API to do a handshake and create a connection to the server every time the request is made.

How Does Caching Work?

When the application is loaded, the app will cache (store) the information displayed by the rendered page. Therefore, when the page is accessed subsequently, the information will be displayed from the cache itself, instead of having to travel all the way to the origin server – and back. 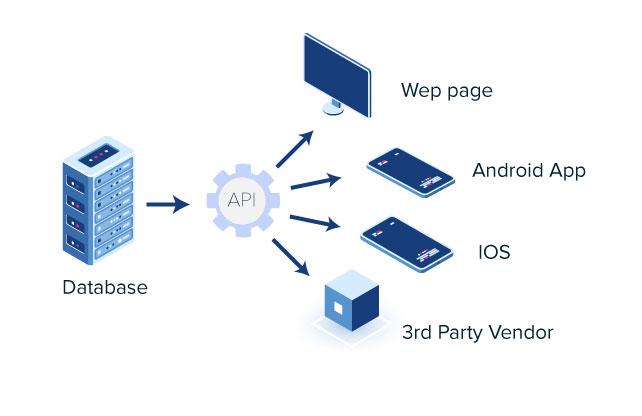 The caching process ultimately reduces the number of requests that the server needs to process – which directly translates to end-user benefits in terms of improved page loading speed and better response times.

The benefit visible to the user can be stark – while the page might take up to 5-7 seconds to load at the first time, consecutive requests will take 50-70% less time to load as API is cached

The cache provides superior performance by making hardware improvements – such as data is stored efficiently in Random Access Memory (RAM)  instead of the slower underlying storage layer. Cache memory is, therefore, more expensive and does the tradeoff for speed with capacity – it periodically purges itself, unlike the databases which generally store data that is of more ‘persistent’ nature, i.e. the data is kept for long-term use and analysis.

An efficient cache also ensures that your origin server will get fewer hits, which might slow it down or at worse cause it to crash- especially during peak traffic. This also ensures that your application delivers a robust and predictable performance even at peak traffic times such as Black Friday. Normally, the increased request throughput might strain your resources, leave you vulnerable, and cause increased latencies in serving the content/ information to the vast traffic burst. Deploy a high throughput, in-memory cache will help to address this issue effectively.

The in-memory data access is significantly faster than discs ( magnetic or SSD) based storage by orders of magnitude. By providing thousands of IOPS ( Input Output Per Second), caching also helps to drive down database costs.

E-commerce companies can apply the cache through the different technology layers, such as Operating Systems or the Networking layers, such as Content Delivery Networks (CDN), DNS, and databases.

So, to summarize, the key benefits that caching provides are an uptick in application performance, lesser infrastructure and database related costs, protection of back-end from unusual/ unpredictable traffic spikes, reduce overprovisioning of the memory and increase Input-Output Performance Per Second Metrics.

How To Set Up API Caching?

Caching is an important method to ensure that your application is serving data to the users efficiently for both the client and the server. While caching is often seen as a magic bullet, that will deliver efficiency and cut costs, it is seldom as straightforward. Proper application of caching means applying the correct configurations, signing up with the right technology. Also, the specifics will differ across different implementations For example, if your application is built on Magento or PrestaShop,  you can go to your settings, tools and cache management. From here, you can set up the API caching, define the cache lifetime (the cache will expire after this time).

For more complex deployments, you will have to do multiple configurations by following the appropriate guidelines and best practices – such as estimating the costs, allocating the cache appropriately, ensuring security, and accuracy among other things. In general, for cache implementations, it is important to determine the validity of data that is being cached. A successful cache will reduce response times and will result in higher hit rates. A cache hit rate measures how many requests to cache storage, such as a CDN, can deliver from its cache storage – compared to how many requests it receives.

Adjustments, such as the Time-to-Live can be configured to ensure that a time-span that data remains cached for an amount of time. With a successful Time-to-Live setting, you can ensure less content to be delivered from the origin so your application will respond faster. Other adjustments, such as optimizing cache control headers, purging cookies, and optimizing the infrastructure helps to deliver a high hit rate.

Often, you would need a strong technology partner to help you set up the API caching successfully, especially in case you don’t have a strong in-house technology team. At Medianova, we bring years of experience and expertise to deliver the turnkey solution that will power your business.

We provide global CDN solutions in streaming, encoding, caching, micro caching, hybrid CDN, and website acceleration to ensure that your application performance is consistent and as desired even under peak traffic conditions.

The Benefits of CDN for the Gaming Industry

The Benefits of CDN for the Gaming Industry The gaming industry has witnessed a phenomenal growth in the last few years. The global nine gaming market only…