People have continued to shop voraciously during the holiday season, early Black Friday Shopping Season trends indicate. It has been around two weeks since the Black Friday 2019, and we have a host of numbers and statistics from the shopping bonanza for you (sources below).

The excitement and the urge to shop during the Black Friday Season is not limited to the US. It has spread to other parts globally as well. Analysts recorded the Black Friday 2018 as the busiest shopping day in terms of total transactions of 2018 in Europe.

Coming To The Numbers and Statistics From 2019

We have made some research to put together for you the data of Black Friday 2019 in one place. From our point of view, the statistics strongly reinforce the idea that Black Friday continues to remain a great time for shoppers with new trends shaping the conversation.

Adverse weather conditions in many regions of the US helped the record-setting digital sales for the 2019 Thanksgiving weekend. With the increasing adoption of e-commerce among shoppers, it has become easier for them to search for items online, and it has been another reason why digital sales have seen an impressive surge.

Adobe Analytics, which analyzed one trillion visits to US retail sites, 55 million SKUs and 80 of the largest 100 US web retailers, estimates that the sales for the full weekend (Thanksgiving through Cyber Monday) were over $29 billion. It is 20% of total revenue for the entire holiday season, up from 19% last year.

Thanksgiving Day’s record online sales of $4.2 billion in the US represent a 14.5 percent increase from 2018.

Consumers spent $7.4 billion online, which was an increase of $1.2 billion over Black Friday 2018. But, online revenues were slightly under Adobe’s $7.5 billion prediction for the day.

Other exciting insights are also available – Smartphones drove the majority of visits to retail sites at 54%, growing 19% YoY. Larger e-commerce merchants received more sales via smartphones than smaller ones. According to Adobe, Black Friday 2019 was “the biggest day ever for mobile,” with over $ 2.9 billion in sales. The smartphone sales by itself accounted for 39% of all e-commerce sales, which is an increase of 21% from the same time last year.

Among the channels driving most significant sales, throughout the holiday season, paid search has ranked highest for driving revenue, representing a 24.4-percent share of sales, followed by direct traffic at 21.2 percent, and natural search at 18.8 percent. The email has increased at 16.8 percent, up 9 percent over 2018. However, social media has a low impact on driving online sales with only a 2.6-percent share. 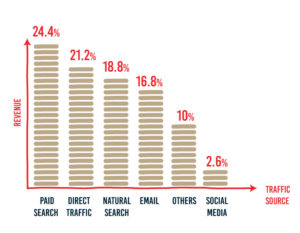 Adobe also found some more interesting shopping statistics. The average order value on Black Friday rose 5.9% year over year to $168, which is a new record. It is attributed in part because shoppers have become more comfortable buying bigger ticket items online.

Over recent years, shoppers begin their shopping activities much before Black Friday. As per Bank of America analysts, shopping during the “early” shopping season, as defined by the analysts to be the 21 day shopping period that ends on Black Friday grew by around 2.2% y-o-y from 2018.

The bank’s analysts note that online shopping accounted for 38% of all shopping during this early shopping period.

With the rise in social media shopping and the widespread use of the retail apps, US consumers did more Black Friday spending on their phones than ever before, starting on Thanksgiving.

Salesforce found that Shopify merchants made more than $900 million in total sales, and of these, 69% of purchases were made on mobile, with the remaining 31% on desktop.

Areas of Concern For E-commerce Businesses

However, there have been a few areas of concern also that businesses have had to contend with. Shopper visited stores less frequently this time. According to ShopperTrak, the visits to stores declined by 3% year over year. This Thanksgiving Day was busier than last year, rising 2.3%, but Black Friday store visits decreased 6.2%

Store analytics firm RetailNext, in their report also found that Black Friday brick-and-mortar traffic was down by 2.1%, sales were down by 1.6%, and the average transaction value was down by 6.7%. However, RetailNext found that conversion rate grew by 1.7%, and the shopper yield grew by 2.7%.

What’s The Takeaway for Businesses?

There are important takeaways for e-commerce players, both established and those looking to carve their market in this lucrative segment.

There is a huge potential out there in this market, and investing in user experience to make the mobile shopping experience smoother and simpler will be a massive competitive advantage. It will increase sales and avoid the user from abandoning their shopping cart mid-way.

For instance, Costco’s website went down entirely for at least 16 hours early on Thanksgiving Day, leading to millions of dollars in sales losses and additional losses to reputation. Retail major H&M also experienced a poor website performance on the holiday season. It can translate into lost opportunities for your business and must surely be avoided.

Read How investing in CDN can help be prepared against website disasters.

Being mobile optimized and having fast loading speeds, even during the periods of peak traffic are going to be critical differentiators among brands.

It makes the shopping experience smoother and more straightforward for customers who are making purchases on mobile more often during peak sales periods.

At Medianova, we provide global CDN solutions in streaming, encoding, caching, micro caching, hybrid CDN, and website acceleration to ensure that your website performance is as desired even under peak traffic conditions. We have delivered and managed CDNs for leading enterprises and our state-of-art solutions are benchmarked against industry-leading quality parameters.

AVIF: The New Image Format Today, everyone has thousands of pictures on their phones and computers. In e-commerce or fashion sites, this number reaches up to millions.…

A Comparison Between Edge Containers and Other Edge Computing Solutions