Medianova is Getting Ready for HTTP/3

HTTP/3: Getting Ready For The Integration

As Medianova we are dedicated to serving our customers with the most current and cutting-edge technologies. In order to maintain top-quality services to our customers, Medianova R&D Team closely follows the current trends of the Internet. In this blog post, we want to share with you that we are on our way to fully support Hypertext Transfer Protocol Version 3 (HTTP/3) within our systems as we have already made alpha-stage tests on our systems.

One of the most significant advantages of HTTP/3 is when it comes to increased speed of fetching objects: Faster the objects reach users, faster a more satisfied customer. We think of customer satisfaction as a double-edged sword; Medianova customers’ satisfaction along with their customers’ satisfaction. For this sake, we are on our way to integrate HTTP/3 operability within our infrastructure.

As the first HTTP protocol, Internet Engineering Task Force (IETF) standardized HTTP/1 in 1991. Then the second version was finalized in 2015. Internet currently uses both versions of HTTP (HTTP/1, HTTP/2); however a third version, HTTP/3 is at its final stages to be deployed over the Internet. HTTP/3 RFC is on its 27th draft and in the near future, it will be used widely because of its advantages over earlier versions.

The distinct advantage of HTTP/3 is when it comes to its speed over older versions: HTTP/3 is built on a different transmission protocol that is User Datagram Protocol (UDP); however, HTTP/1 and HTTP/2 are built on Transmission Control Protocol (TCP). How UDP is superior in speed compared to TCP by means of transmission is explained below. We can say that the UDP protocol is at the core of HTTP/3 as it was named as HTTP-over-QUIC (Quick-UDP-Internet-Connections) until late 2018. A global collective effort to build the HTTP/3 protocol started by the desire to use UDP rather than TCP and QUIC was born. Soon after tur HTTP-over-QUIC, the RFC draft was renamed as HTTP/3.

Furthermore, a different server-client acknowledgment protocol is natively integrated into HTTP/3. Older versions HTTP/1 and HTTP/2 use a ‘handshake’ based on the TCP to authenticate each other. By means of QUIC; HTTP/3 uses a Transport Security Layer 1.3 (TLS 1.3) 0-RTT (Zero Round-Trip-Time) which is faster than a TCP handshake. There are two types of TLS 1.3 that are named 1-RTT and 0-RTT –named by the number of Round-Trip-Times (RTT) it takes for a handshake to occur. HTTP/3 includes TLS 1.3 0-RTT support that an authentication handshake is faster compared to older versions of TLS.

The main reason is that HTTP/3 uses a different connection protocol than HTTP/2. Transmission Control Protocol (TCP) connection is established for HTTP/2 connections between the server and the user where this connection is established by exchanging multiple packets. TCP connection requires the exchange of all the packets successfully; even if a single packet is lost (packet-loss) during TCP, the server and the user cannot establish a connection. Since packet-loss is frequent over the Internet, HTTP/2 tries to reestablish TCP connection after a failure and this leads to slower connections. On contrast, HTTP/3 uses the User Datagram Protocol (UDP) connection instead of TCP. Packet-losses during a UDP connection do not necessarily lead to unsuccessful connections. HTTP/3 is constructed in such a way that converts the flexibility of UDP to a faster connection. 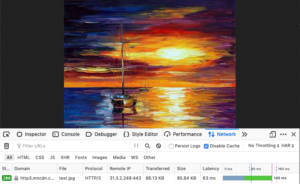 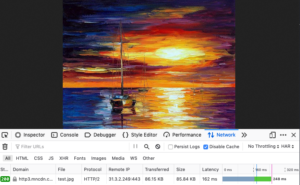 We present two screenshots of a comparison made on Medianova servers: The same image is requested from our servers using HTTP/2 and HTTP/3 protocols separately. We also disable the cache to force the browser to fetch the images from the server every time we make a request for the image. It takes 248 milliseconds using HTTP/2 protocol to get the image and 145 milliseconds using the HTTP/3 protocol so it reaches 41% faster. As our straight use-case shows us, connections made via HTTP/3 protocol are faster than predecessor protocols as HTTP/3 is architected using a packet-loss tolerant connection protocol.

HTTP/1 and HTTP/2 are currently supported by all browsers as they are the current industry protocols. Whereas; the latest versions of leading web browsers have HTTP/3 support: Starting from Firefox Browser v72 and Chrome Web Browser v79, HTTP/3 is not the default protocol but can be enabled.

Included but not limited to HTTP/3; Medianova R&D Team closely investigates the latest technology trends as we started to test HTTPS/3 protocol on our alpha systems. We want to fully integrate HTTP/3 support on our CDN network when HTTP/3 will be released and will be the state-of-the-art HTTP version. Get in touch for more information and updates.

This is WebP and This How To Use It

WebP and How To Use It Websites are so amazing, right? Just think about the immense scalability that they provide to businesses. Today, even if you are…

This Is How CDNs Are Enhancing The Mobile Experience

How CDNs Are Helping Improve Mobile User Experience Mobile technology made one of the most transformative inroads into business models in the last couple of decades. Coming…

This Is Why We Use Slack For Agile Customer Support

What’s The Relationship Between CDN Content-as-a-service ?

Webinar Recap- The State Of Private CDN In 2020